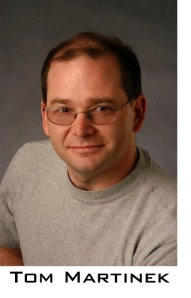 I’ve been working in Visual Effects since about 1986. I started out as a make-up effects assistant right after high school. I worked on several (very) low budget horror movies in the NY area.  I was the first intern ever hired at Troma films.  Day one was spent cleaning bathrooms that hadn’t been cleaned in years.  By the end of that inital week I was working on script revisions for Troma’s WAR.  I was still working with crap, but my hands smelled a lot better…. All in all it was quite an experience working for them.  It was hell at the time, but I can look back now and tell some great stories of working on that production.

Eventually I worked my way out to California where I became a model maker and camera assistant at Apogee Productions, I was the head of the film scanning department at PDI in LA and for the last 26+ years I’ve been a sequence supervisor at Industrial Light & Magic.

You could say I’m living the dream…..the dream of a 10 year old kid who sat in a theater and was floored as a Star Destroyer flew overhead. Heaven opened up and angels started to sing and I heard a voice that said “THAT’S WHAT YOU ARE GOING TO DO FOR A LIVING!”.  Sometimes after I’ve been working long hours for months on end, I want to strangle that kid…… 🙂